April 28, 2014
Hello again!
I just discovered that I took a LOT of pics of the finished tutu. They were on another card so I only just found them LOL. It's a real shame I only have the one piccie of the me in the outfit but that can't be helped now. The below images show a bit more of a detailed view of the tutu, done with less than 3 meters of tulle! I am still shocked by this... for a really crappy girls tutu you can easily pay £7 here. This only cost me £3 in tulle (I still had ribbon leftover)! I still have a little bit left so I can still add some more if I should need to for some reason. 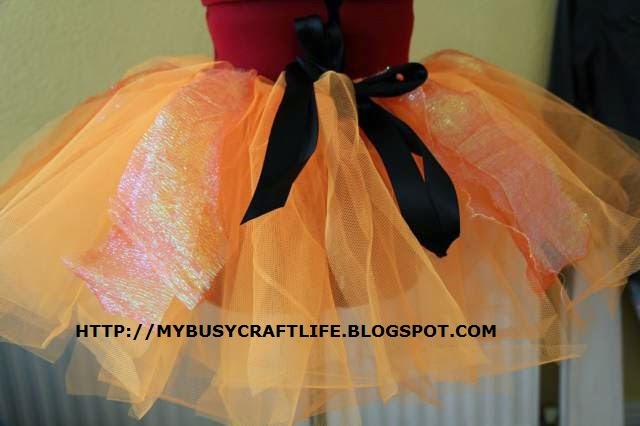 I used a black ribbon as a base. I did sew two ribbons together as the instructions say. I decided on black for several reasons: I had plenty of it around, this colour combination is great for both Halloween and the MS Society who I will be running for in October. 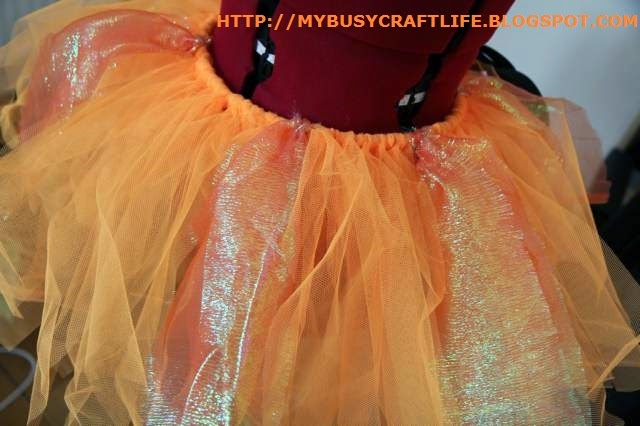 It came out in a really nice mushroomy shape :) 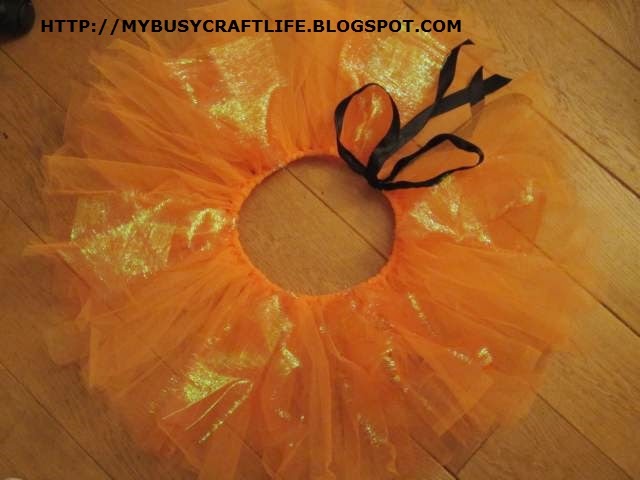 This was a pic I actually took yesterday as I had to detangle the tutu a bit. My jacket was quite long and managed to get caught in the tulle sometimes. But now that it's all straight again, I can easily store it until I need it again.

If you've read yesterday's post about the event, you will see that I also had a beanie. When I ran in October it was so cold and I kept thinking 'if only I had a hat'. So this time I made sure I had one. It was a bit of a last-minute purchase, but I found a pink Puma hat for only £2.50! It had the large symbol on it, but I wanted to embellish it with a large bow anyway so that didn't matter. Making the bows actually took longer than the tutu but it came out quite well I think: 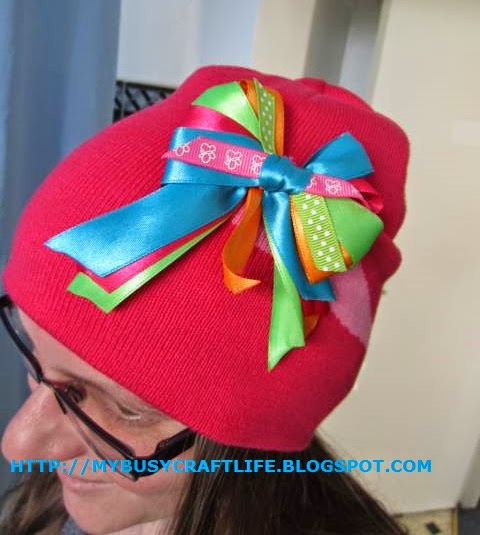 A while ago, they had spools of neon ribbon on sale at Tiger Tiger for only £1 each so I stocked up of course. These come in very handy for bright coloured events like this :) I also have a bow maker which was part of the problem since I'd never used it before. In the end I made a normal bow on it with 2 ribbons and added two ribbons just before tying it up. It's very cheerful :) 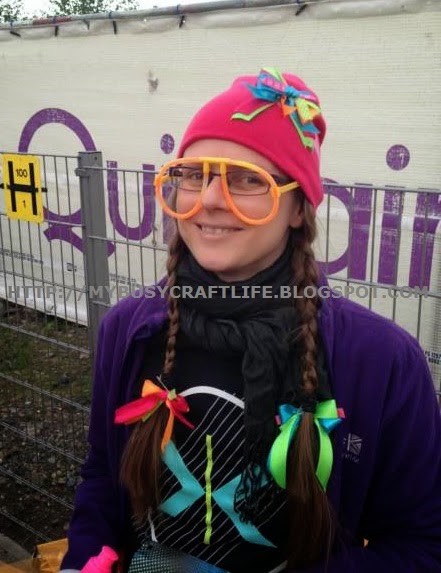 I also made some for my hair, and I think this is the only clear piccie of it. Yes this is me goofing around in the queue, the glasses came with my running pack. The hair bows are half of the large one, each having only two large ribbons and a small one. So one was pink and orange with a small green ribbons, the other was blue and green with a small pink ribbon. 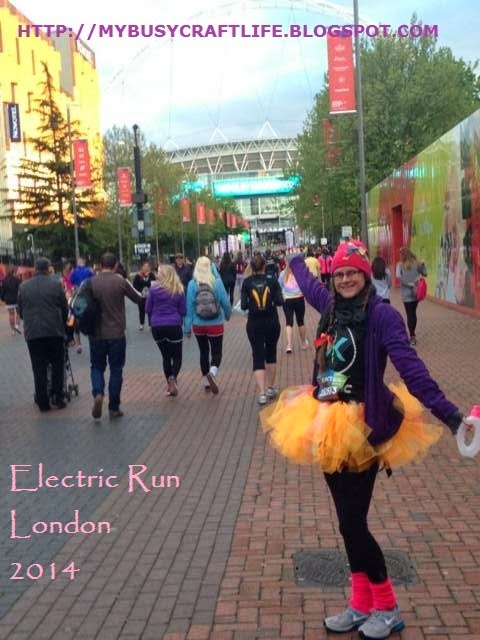 And this is the whole look! It was a very cool event :)
crafting running

Popular posts from this blog 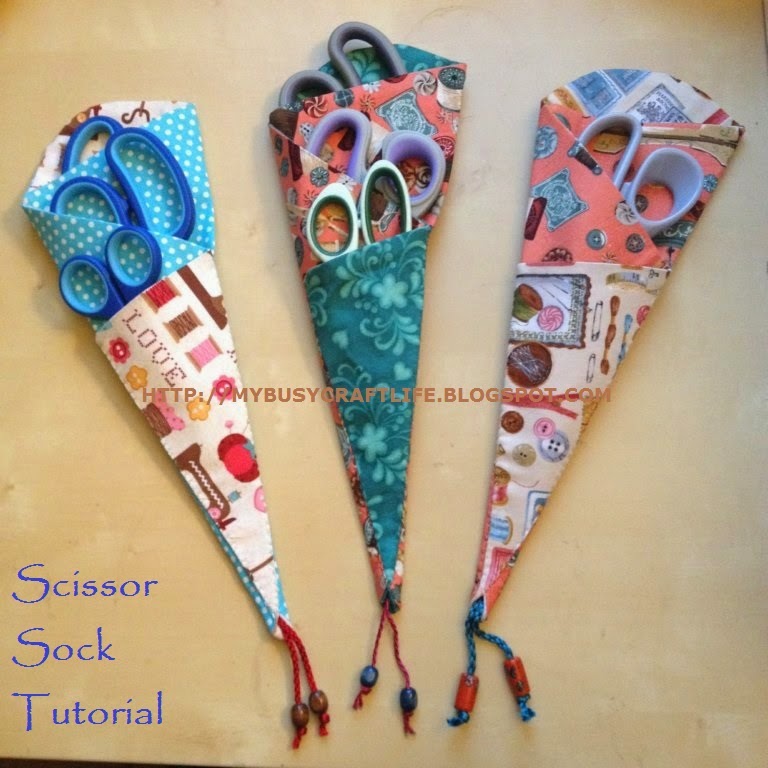 Hi all! I've had so many request from friends for these scissor socks that I wanted to share the tutorial with you. I've been sick for a while so this tutorial is well over due. This will be my first sewing tutorial so I hope it's clear enough :) Feel free to make you own or for friends or family, but please don't use it for commercial purposes or make them to sell. It is after all not my pattern. So let's get started :) You need: 2 pieces of fabric with different print Interfacing (with ironing option on one side only) Cord Ribbon 1 button  Beads Cutting mat and ruler Rotary cutter and scissors Some sort of circular template (I use a small plate) Needle and thread Cut the fabric and the interfacing to a rectangle of 9x12.5 inches (23x32 cm). Decide which fabric you want where, this will influence the next step. Use your circular template to round one corner. The fabric you want on the top and bottom of your sock will have t
Read more 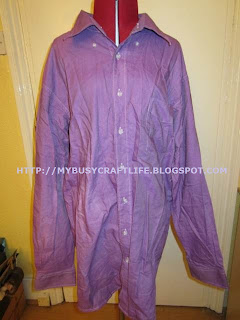 Hi everyone! Fabulising February is nearly over and this is the last project I have managed to complete.Tomorrow I'll post a short recap showing all the finished projects. Wanting to go out with a bang, I tackled a men's shirt that the bf bought online many years ago and forgot to return it so I wanted to make something nice out of it. Seems a waste to be throwing away a brand new shirt! Granted, it was white and while probably cotton it was very thick and stiff material. So I dyed it purple. Of course. Once it was purple, I then had to try and do something with it. Easier said than done! I finally found a cute idea for a dress in blogland (didn't save the link though) and I really wanted to try that. But the instructions were super tricky so in the mending pile it went. This is the shirt. Much too large even for the bf but purple at least ;) And a bit wrinkled for being in the bag for a very long time. But with only a little time left in my Fabulising February
Read more 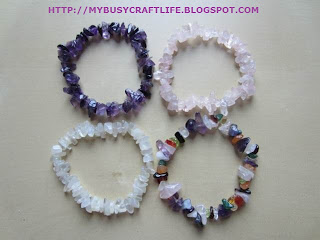 Hi all, I havent actually sewn anything but I'm slowly starting to craft again which is always nice :) The other I found my bead box. Oh my, I had no idea I had this many unused beads! So it was time to make something :) I had lots of semi-precious gemstones, a whole lot of amethyst, rose quartz, moonstone, and even a mixed bunch. What did I make? Bracelets!! It was definitely one of those crafts that are not noisy and could be done while watching tv so it was perfect for something to do in the evenings :) I think they came out quite well! I made four of them, one from each part of the bead box, and I can wear them mixed or just one. I just love the amethyst one, it's totally my favourite :) So hopefully I'll be making more stuff soon, though I also have some posts ready about visits since I really never get the time for that usually. I hope you dont mind!! :)
Read more